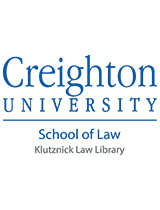 To Educate and Serve: The Centennial History of Creighton University School of Law, 1904-2004

The full text of this book is available as a PDF in the Creighton Digital Repository. The library has a print version in the collection. If you would like to use that copy you can find it in the library at KF292.C74 P65 2007. If you need assistance finding this book ask for help at the Reference desk.

The law library offers extended library access to students who demonstrate a need for this access. The access allows students to enter the library during specified non-business hours during the week and the weekend.

1. Watch the extended access orientation video. This video fully covers how access works and what hours the library can be accessed.

The video is available at this link.

2. Come to the law library administrative suite and sign an extended access form. You will be initialing that you watched the orientation video.

3. You will receive a red card (purpose described in video) and Card Services will be notified to activate your ID for door access.

If you need Reference Help during the times classes are being done online please send your questions to lawref@creighton.edu

When you email lawref@creighton.edu your email goes to six members of the law library staff that provide reference assistance.

The library subscribes to these online study aids packages available to Law students and faculty:

S.C., in response to the confession, makes a My-Cousin-Vinny defense. There are many gems in the 1992 movie My Cousin Vinny - rated by the American Bar Association Journal as the third greatest legal movie of all time - about trial lawyering and procedure, but in one particular scene an arrestee is being asked about shooting a store clerk after inadvertently taking a can of tuna fish. The sheriff asks:

Sheriff: When'd you shoot him?

Sheriff: At what point did you shoot the clerk?

Arrestee: I shot the clerk?

Sheriff: Yes. When did you shoot him?

Arrestee: I shot the clerk?

The sheriff then gets interrupted by a staff member and the interrogation abruptly ends. At the subsequent trial for the murder of the store clerk, the sheriff, recounting the confession, reads the transcript of the arrestee's statement, "I shot the clerk," as a declaration rather than as a question, which changed the meaning.

The library encourages you to look over the movies in the collection. The movies can be checked out and watched at home. If you do not have access to a DVD player the overhead projectors and computers in 136,139, and 143 can be used to watch a movie. If you want to use one of these rooms for a movie please use the room reservation system so that you have dedicated access to the room while you watch the movie.

The library also encourages you to be critical viewers of the movies in the collection. Consider looking at articles that discuss the movies or the court cases related to them. For example, the United States Supreme Court ruled on the Amistad case - United States v. Libellants & Claimants of The Schooner Amistad, 40 U.S. 518 (1841). The case is challenging to read because of its age and other factors. But looking at this case in conjunction with the film would provide an introduction to a historical case.

Here is an excerpt from an article on the Amistad movie:

Moviemakers believe that history can be made more dramatic. They add and subtract characters, invent dialogue and scenes, make heroes more heroic, make villains more villainous, correct incorrectness, make ends happier, and turn shades of gray into black or white. They even tell lies--all in the interest of providing a good show, of course. Steven Spielberg, producer-director of the 1997 historical drama "Amistad," is no exception. 1

Whether Hollywood's reshaping of history is good or bad depends upon whether one believes it is more important to be thoroughly entertained or to have a clear sense of history. Right now, on this side of the Millennium, few people seem worked up about the fictionalizing of history.

The Journal of Maritime Law and Commerce is probably not the first source that most viewers of "Amistad" will consult to see if they got their history straight from Spielberg, but it is the aim of this article to make it a good choice for those who do. As the title of this journal suggests--and as its editor insists--special attention will be given in this article to the role admiralty law played in the improbable drama that began in 1839.